The green tire industry, composed of low rolling resistance (LRR) tires as well as those emerging from ‘green’ (sustainable) materials, is a fast-growing part of the overall tire industry. The rapid growth of the sector is partly due to growth in the tire market itself, but mainly due to society’s increased interest in sustainability.

The global green tire market is  estimated by Smithers  to be $81.6 billion in 2018, which would put it at around 38% of the global tire industry as a whole. Smithers’ Future of Green Tires to 2023 market report forecasts growth of nearly 11% per year in value and volume through 2023, when value will reach $137 billion. 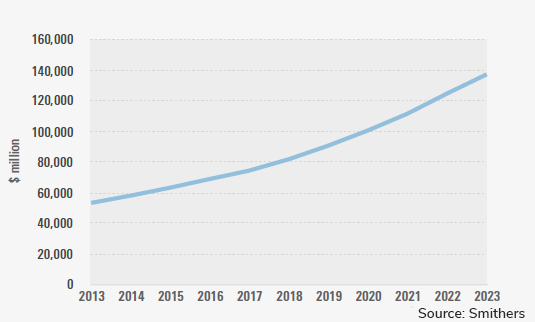 The main driver of the global tire market is the growing middle classes and the resulting increase in vehicle ownership in the emerging economies, particularly Asia. Growing concerns about both greenhouse gas emissions and the limited availability of natural resources to meet the demands of expanding numbers of consumers are forcing industry to meet government and market demands for more sustainable products like green tires.

As a result, tire makers are pressing forward with sustainable tire technologies, including renewable rubbers in their products that perform equal or better than traditional rubber. Many tire makers have entered strategic partnerships with government, researchers and bio technologies companies to advance their efforts to develop renewable rubber on a commercial scale.

Among noteworthy renewable rubber developments, was Kuraray’s announcement in 2017 that its sustainable liquid farnesene rubber now used in passenger tires. Sumitomo Rubber is using Kuraray’s liquid farnesene rubber (LFR) made with sugar cane as a performance enhancing additive in the production of its latest winter tire, the Winter Maxx 02. This is the first time LFR has been used in car tires and is key ingredient in improving ice grip, Kuraray said. LFR is a liquid rubber using farnesene, a new biologically derived diene monomer that was developed by US biotechnology company Amyris.

Drivers of early and ongoing adoption of green tires are regulatory with increasing pressure on vehicle makers to reduce vehicle emissions and meet rising fuel economy targets. This pressure is driving development of LLR tires and their growing OE market penetration. Growth of alternative powertrains (hybrid and electric), as well as the evolution to shared/fleet vehicle use, and autonomous vehicles adding additional impetus to green tire adoption and continued gains in rolling resistance reduction are demanded.

The replacement market for green tires has also grown through better consumer education and awareness provided by the European Union’s consumer tire labelling scheme that rates tire rolling resistance and other performance variables. Regulatory and labelling schemes promoting OE and replacement LRR tires are expanding beyond Europe too; OE market penetration is catching up to European levels in other regions with discussions taking place in the US.

Other replacement market drivers are economic, with fuel cost (and battery range) sensitivity on the part of vehicle owners and fleet operators (increasingly supported by real-time tire data allowing total cost of tire ownership to be tracked) being important even during periods of more moderate gasoline prices.

Green tires are continually being optimized to achieve the lowest possible rolling resistance by means of fillers such as highly dispersible silica (HD silica or HDS), improved carbon blacks or nanotechnology. This segment accounts for most of the market in 2018, and will predominate through 2023.

Other materials are contributing, some also from the standpoint of reducing rolling resistance, but also from that of general sustainability. Improvements in synthetic rubber attributes and sustainability (i.e. non-petroleum alternatives) and the increased use and supply of natural rubber are key areas of attention and innovation. Initially, the emerging green technologies will be small in volume and value, with greater commercial potential occurring after the forecast period.

Rising in tandem with green tire unit demand, raw materials consumption for green tires demand is estimated at over 17.8 million tons in 2018, growing to 29 million in 2023, according to Smithers The Future of Green Tires to 2023 market report. Elastomers, fillers and fabrics are the dominant categories by weight, and growth will be led by sustainable ones such as natural rubber and rayon fabric, with synthetic rubbers showing the least growth.

Improvements in raw materials have been responsible for advances in rolling resistance and sustainability. HD silicas are playing an important role in green tire material consumption, but improvements in elastomers (e.g. functionalized) and fillers (carbon black) and other inputs such as oils and fabrics are also important.

Representative of the growing application of silica in tires, chemicals company Solvay is producing Highly Dispersible Silica (HDS) at its new plant in Poland. The plant produces 85,000 tons of HDS annually for use in green tires. Solvay said the use of its advanced silica grades in tires reduces vehicle fuel consumption by as much as 7%. The company also launched production at a new silica plant in South Korea that is expected to raise annual capacity by close to 50%.

Biosourcing of synthetic rubbers and other ingredients, the expansion of natural rubber availability and biological alternatives to natural rubber are key areas of attention too.

In the area of biorubber, Cooper Tire and Rubber and its consortium partners, including Clemson University, Cornell University, PanAridus and the Agricultural Research Service of the US Department of Agriculture, completed a five-year $6.9 million Biomass R&D Initiative (BRDI) grant called “Securing the Future of Natural Rubber—an American Tire and Bioenergy Platform from Guayule” in 2017.

The grant team studied the feasibility of using guayule in tires versus Hevea natural rubber and produced concept passenger car tires in which all natural and synthetic rubber was replaced by guayule-based natural rubber.

Chuck Yurkovich, Cooper’s senior VP of global R&D, commented: “Cooper built more than 450 tires, replacing various tire components made with Hevea and synthetic rubber with those made with guayule and testing each for overall performance.

Cooper could use guayule rubber in tire production tomorrow if enough material was available to meet its production needs at a competitive price.

Large opportunities exist to expand sustainable tire products and processes, with only about half of inputs currently considered sustainable. The largest of these (in terms of tonnage) are synthetic elastomers, carbon black and fabric (nylon and polyester) cords. Other objectives are to reduce material waste, reduce energy use in manufacture and assure environmentally friendly disposal at end of life (via materials recovery, primarily).

The electric and autonomous vehicle market

Hybrid and electric vehicles are a natural market fit with green tires. Besides being naturally aligned, the requirements of these vehicles, such as torque and acceleration, and the need for maximized energy efficiency to extend battery range will increasingly place demands on tire makers for low rolling resistance produces as they become a larger share of the market. Drivers of these vehicles are also more likely to stay with LRR tires when replacing them, regardless of price.

Another is the emergence of autonomous vehicles. Full adoption lies outside the bounds of this report’s forecast period, but tire development will be increasingly oriented to the requirements of these vehicles. For one, it is likely that most or all will be electric, requiring the latest in terms of reduced rolling resistance. High reliability will also be important, and there will be closer attention paid to non-pneumatic and intelligent tire options that eliminate or manage tire pressure and reliability issues, in the case of intelligent tires in addition to providing detailed and real-time tire information for management and optimization of cost of ownership.

The development of autonomous vehicle has tire companies and others introducing new products to keep pace with the disruptive technology. For example, Goodyear’s two concept tires for autonomous vehicles include the spherical-shaped Eagle-360 that offers maneuverability, connectivity and biomimicry for autonomous mobility and the IntelliGrip, which features advanced sensor and tread technology. The Eagle-360 allows the car to move in all directions to cope with space limitations. The tire uses embedded sensors to communicate road, weather and tire conditions and has a magnetic levitation system that suspends the car, resulting in a smooth, quiet ride.

The IntelliGrip senses road surface and weather conditions for improved driving safety and performance. It adapts to road conditions by sensing a rainy or slippery road surface so an autonomous vehicle can adjust its speed.

There are other aspects of the green tire market that make it attractive, as well as challenging. The availability and pricing of natural, synthetic and biosourced materials can be unpredictable, and it is not clear how quickly many of the greener technology options can progress from concepts and pilots to commercial scale.

All of the major tire companies are committed to green tires, although rates of market uptake vary depending on local regulations and preferences. The drive to reduce emissions, improve fuel efficiency and accommodate new transportation models is shared by governments and tire companies alike.

They are not so much viewing green tires as a distinct product segment, but rather as a critical technology and way of managing resources that is steadily increasing to become the central element of their business model.

The Future of Green Tires to 2023 offers quantitative forecasts that break down markets by material and process, end use and region. For more information on purchasing options, download the brochure.