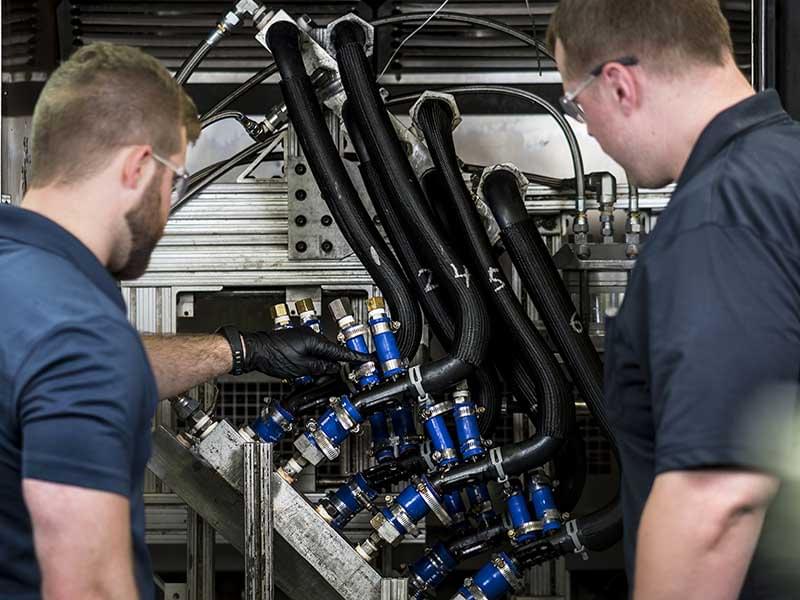 With expertise in flow technology solutions in the automotive industry, Tristone delivers innovations in the fields of engine battery cooling and air charge, focused on quality and sustainability and supported by a customer-oriented organization. The team at Tristone strives to develop great products and bring them to market in sync with their customers’ traditional, electric, and hybrid vehicle launches, which requires the ability to test to specification with high accuracy and punctuality. When Tristone needed to supplement its global testing capacity and expertise in order to meet the needs of a highly demanding industry, it turned to Smithers.

“All of the major automotive OEMs are developing new hybrid and electric vehicle technology right now, which means significant changes for hoses,” said Richard Dawson, Senior Vice President, Tristone. “I have never seen the industry transform so quickly. It’s more important than ever to be nimble and adapt quickly.”

Tristone operates an internal laboratory in Poland that supports its internal product testing and validation projects for Tristone engineers all over the world. With client demand growing in recent years, Tristone was eager for a flexible solution that would be able to support internal efforts to meet OEM demands for accurate, reliable, and trustworthy testing data within program deadlines.

In 2014, Tristone engineers attended the Automotive Testing Expo in Novi, Michigan. There, the team met a product testing engineer from Smithers, an independent third-party testing laboratory. Less than a year later, Smithers was supplementing Tristone’s hose validation work for an automotive OEM, performing pressure, vibration, temperature, and other testing at its product testing laboratories in Akron, Ohio, and Lansing, Michigan.

“Because Smithers already had so much testing knowledge, they stepped up to the plate very quickly and helped us right away,” said Dawson. “By partnering with Smithers, Tristone immediately gained not only the flexibility we needed to do faster, localized testing, but also the deep industry expertise to bring consistency to the process started by our internal lab.”

“Working with an independent third-party testing lab like Smithers is an effective way to flexibly add resources, like expertise, equipment, and on-demand capacity. You also immediately gain access to expertise about OEM specifications and testing that may not exist with your internal team,” said Jeff Andrasik, General Manager of Product Testing, Smithers Materials Science and Engineering division. “Our team has decades of experience testing automotive hoses, not to mention deep knowledge with a wide variety of OEM specs, so when Tristone approached us, we were ready to get to work right away. And because both Tristone and Smithers operate on a global basis, our relationship has grown to the point where we can support multiple geographies.”

For manufacturers, an in-house laboratory for lifecycle testing has significant start-up costs beyond the initial investment in space and equipment. It can be challenging to attract and retain professionals who are experienced with the testing equipment and OEM testing specifications. The time required to hire and train new staff can delay time to market for any products in development. Outsourcing lifecycle testing to an experienced third-party laboratory enables companies to supplement internal testing capabilities, get test results faster, confirm the accuracy of internal data, or meet OEM or government demands for independent analysis.

The two most prominent considerations when deciding whether to outsource testing are in-house capacity and timing. Global manufacturers like Tristone manage the competing priorities of product, research and development, and testing and validation. This can be difficult to balance when multiple facilities rely on the same internal lab. Tristone analyzed the benefits of a strong relationship with an independent lab and chose to partner with Smithers to support their worldwide initiatives and their internal testing team.

With facilities in North America, the United Kingdom, and China, Smithers delivers testing and expert support to multiple facets of the automotive industry, including component testing, materials testing, technical consulting, and winter testing. Some automotive OEMs have been working with multiple Smithers laboratories for many years.

“Smithers already has established relationships with the engineering departments at these OEMs, which makes everything faster and more efficient for Tristone,” said Dawson. “These OEMs know they can count on Smithers to deliver accurate data, on time, which adds credibility to Tristone’s results. As a result, they are more willing to trust and accept our results.”

This supplier-credibility has given Tristone an edge in pursuing new customer programs with major automotive OEMs. One of the Big Three automakers said that being able to trust the data generated by Smithers is paramount in our decision making. They place great value on being confident in the abilities and integrity of the people performing the test, not just an accreditation. When testing services suppliers establish strong relationships with OEMs, it’s a win-win for everyone involved.

When it comes to managing the complexity associated with an all-new program with multiple traditional and hybrid electric powertrains, familiarity with each OEM’s standards and test methods makes things move more efficiently, especially in the accelerated product development cycles that the industry operates within.

The Smithers labs have played a pivotal role in Tristone’s work with multiple OEMs. “The lab managers at Smithers have excellent relationships with our lab manager in Poland, and we share the same values: accurate data, flexibility, and clear communication,” said Dawson. “Because the Smithers team knows what is most important to us, they can help us uphold our dedication to total customer focus as we move toward growth on a global scale.”

Many parts of the automotive industry have experienced slow-downs, furloughs, and other obstacles as a result of the COVID-19 outbreak. But Dawson, like many in the industry, believes it will recover.

“Smithers can help us get things moving very quickly and get those timelines back,” said Dawson. “And because they have a good set of global resources, we can work with Smithers in the future as we expand into new and far-reaching customer programs.”

To learn more about Smithers' product testing capabilities, get in touch with Jeff Andrasik at jandrasik@smithers.com.